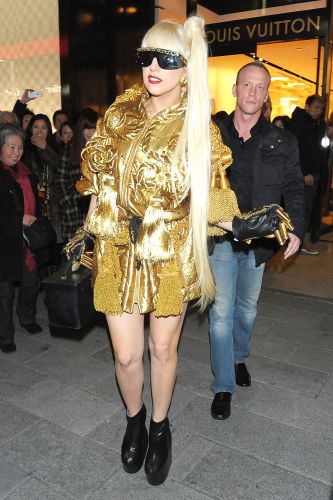 Lady Gaga is famous for her eccentric fashion.

The singer has recently matched wardrobe rather uncharacteristically for her. This happened after her album called Joanne was released.

You must remember the star’s raw meat dresses. She traded them for cut-off denim shorts. Who does not know her unbelievably high heels? Gag traded them for combat boots. However, this Sunday the lady was seen in an airport of Japan in quite her look.

The songstress came to Japan to support Noritaka Tatehana. She has worn the designer’s footwear onstage and in her clips.

Besides she uploaded tons of snaps where she is dressed in a baby pink silk costume. The star’s name was embroidered on the backside of her jacket.

These latest looks were inspired by the presidential election. The singer, 30, says that she likes to be fashionable in times of stress.