After Christmas: Angelina Jolie went for a breakfast with children in LA 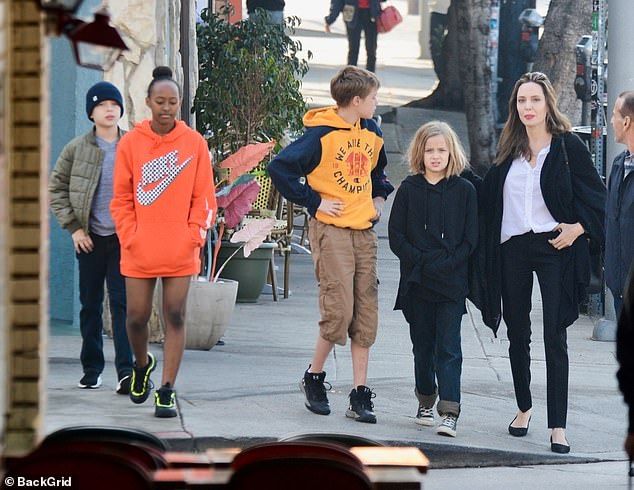 The famous Hollywood actress Angelina Jolie, who figured out all the questions regarding custody with the father of her children, Brad Pitt, after two years of struggle, began to devote more time to her children.

For example, the other day the star came out for breakfast with four descendants in a cafe in Los Angeles, looked very happy and did not hide a smile.

The day after Catholic Christmas, Angelina Jolie went with her children - 10-year-old Knox and Vivien, 12-year-old Shiloh and 13-year-old Zakhara - for breakfast in one of the cafes. The older children of 15-year-old Pax and 17-year-old Maddox were not with them then. The paparazzi caught the family as they headed for the car.

The actress put on black fitting pants and a loose white shirt. A warm black cardigan and ballet flats complement the casual outfit of Jolie.

Recall, star spouses Angelina Jolie and Brad Pitt decided to leave in 2016. After the scandalous divorce proceedings with Brad Pitt, the woman seems to be feeling quite comfortable. The star continues to lead a media life and promote its children in the media space. Users of social networks noted that the star is noticeably prettier and looks just amazing.